Before I became a Gold tier with Jet Airways, I used to frequent the Clipper Lounge in Mumbai’s Terminal 1B very often. This little oasis of calm was tucked away on the Mez floor of the terminal, and was used by Jet Airways before they laid their hands on the lounge inside the security hold area. Both the lounges on 1B were operated by Clipper, a contract lounge operator.

Last week, on a flight to Delhi, I found myself the need to use the pre-security lounge again after long. I was not flying Jet Airways, but Indigo instead, and I needed to kill 45 minutes before boarding started. I found my way there after what seemed like a long time, and did all the same things including to reach this lounge. Even the automated sliding glass gates opened, if my memory serves me right, and I started walking down the passage leading to the lounge. Here is how it used to look before. 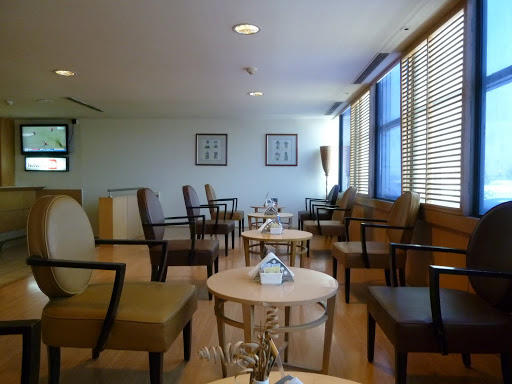 Now, some ignorant soul forgot that this was supposed to be a lounge and struck the hammer here and brought down the entire place! So, all I found was rubble and no lounge. Such was my shock that I did not click any pictures but got out of there ASAP. What surprised me the most was that this area was not bound off-limits, so anyone could have gone there to take a walk, look at the airside and come back.

After pondering what to do, I googled for the MasterCard Lounge Access program again to check if I could use the other lounge as a part of the program. The program has been in existence for a long while and MasterCard was promoting it till December 2011 as of date. Here is the first link that came up, which stated that the airside Clipper Lounge was also accessible under the program. The date was incorrect as communication from Citi and HDFC Bank had already informed me of the December validity of the program.

So, I trudged to the Clipper Lounge to meet the Jet Airways lady welcoming me, saying “Welcome to the Jet Airways Lounge”. This was not my first encounter with the lady, but today I was not flying 9W so I requested for a Clipper representative who could authorise my lounge trip. There was no one around.The lady informed me that a few days back they tore down the other structure. I showed here the information which stated the use of this lounge, but she did not budge. After a 10 minute futile discussion, I walked away because this was getting nowhere!Apparently, Clipper has entered some sort of a pact with 9W to allow exclusive use, though I am not sure if they could do this under their agreement with the airport.

So, for Indian flyers from Mumbai 1B, watch out if you don’t fly Jet. There is no longer a welcome lounge for you around! Hard Luck, and arrive in time!

« Checked bag fee for the 2nd checked bag from India may be gone soon
Looks like I am up for a MegaDo!!!! »