A few hours ago, United Airlines flight UA 328 experienced an engine failure and returned to Denver International Airport. What is astounding is that United Airlines 328 Engine Failure caused many debris to fall on the ground, but eventually, everyone landed safely as they should, and no one got hurt. Here is what happened.

United Airlines flight UA328 was scheduled to operate with a Boeing 777-200 from Denver, Colorado to Honolulu, Hawaii on January 20, 2021, with 231 passengers and ten crew members. As the aircraft took off and climbed, it lost engine number 2 at about 13,000 feet. Here is a dashcam video of what you could see from the ground.

Here is a video of what a passenger on board could see the right engine.

On the ground, people witnessed a lot of debris from the aircraft fall to the ground. Someone’s door cam captured this.

The debris was all over the place and landed over people’s houses in the Broomfield area, sometimes very very close to their homes. Thank goodness it did not harm anyone.

As for how big some of the components could be, the picture is doing the round for scale via the Broomfield Police Department. 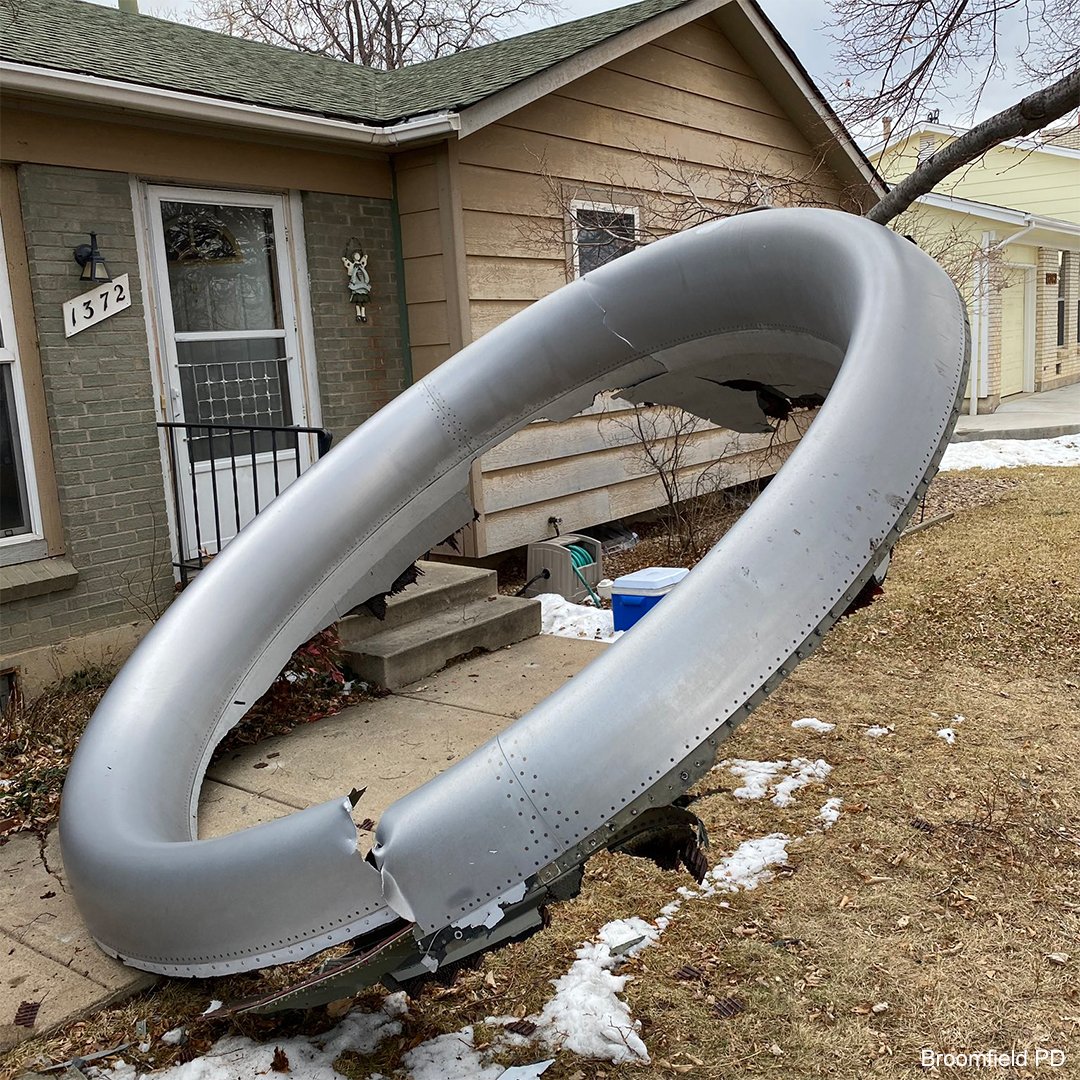 This should tell you how we got lucky with no lives lost.

Here is the ATC Audio of the incident.

As you can hear in the video, the pilot declared a Mayday for a life-threatening emergency and was offered the Denver airport’s full resources by the ATC. They were told they could have any runway they want, but the thing you should be most impressed with is that the pilot and ATC were both calm and composed and worked accordingly. The last instruction to the pilots was to stop on the runway, and they would be told where to proceed after an inspection was done of the aircraft.

The aircraft returned to the ground about 25 minutes after takeoff. Here is the footage from the aircraft as the plane landed in Denver.

The plane involved in the incident was N772UA, the fifth Boeing 777 ever made, and was in the United fleet for over 26 years. Aviation journalist Jon Ostrower caught some interesting frames from the video that show a half-broken engine blade (and you can also notice a blade gone fully too!)

The National Transport Safety Board (NTSB), the agency responsible for accident investigations in the USA, has already taken charge of the investigation. All the debris will be collected by them to put together and investigate what happened around here. A preliminary report should be out in a few weeks, and a full report could take up to a year, usually to be released.

UA328, United Airlines today departed and arrived back at Denver International Airport in about 30 minutes after the Boeing 777-200 operating the flight lost engine two shortly after take-off and jettisoned debris on the ground in a residential area. Fortunately, no one got hurt up in the air or on the ground. This should also be a testament to the fact of how aircraft are built for safety, and these incidents don’t happen on an ongoing basis. Hats off to the crew and the ATC, who coordinated and quickly got this aircraft back on the ground.

We will update this report with more inputs as and when available, keep track of this United Engine Failure story here.

« Karnataka requires CoVid-19 negative report for those arriving from Maharashtra and Kerala
Bird Lounge Dehradun Airport: My Experience during the pandemic »